Fred’s of Worcester, is on the Tything amongst the small artisan shops. This is a beautiful part of the city. Fred’s certainly looks the part from outside and when you step through the café looks relaxed, clean and comfy.

The breakfast menu is the usual spread of Full English, with veggie and vegan options. Plus a range of hot sandwiches and pastries.

We decided to keep it light and ordered coffee and Breakfast Baps.

FattyCat’s Bacon Bap which was filled with sufficient bacon and he said it was nicely cooked and the bacon appeared to be of good quality.

I had a Sausage Bap which was filled with a very bready sausage – if someone had said it was Vegan I wold have believed them and served with a spicy red sauce on side, which in itself was tasty.

I suppose the worst part of the visit was the service – I have no idea why but the waitress was a strop and being short with every customer and plonking plates down in front of people. There is too much choice is Worcester that service like this will mean that we won’t be returning. 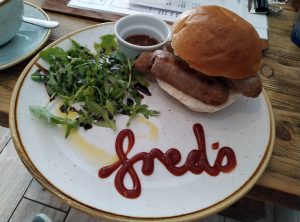