Many thanks to Groupon and their offer of three courses and a bottle of wine for two people for £50.00. I had been wanting to eat at this restaurant at the top of Cube in Birmingham for a long time. I had to laugh at FattyCat’s comment that he didn’t want messed about food like you see on the TV at the Michelin restaurants. I hoped that he would not be disappointed.

We arrived at the restaurant at 5.45pm (the offer was only available until 6pm on a Saturday). We were greeted warmly by the ‘greeter’; he noted from the booking that it was Groupon voucher and made absolutely no fuss at all about this. We were sat a table one row from the windows and was grateful to be under the air-con as the sun beat through the windows which gave panoramic views across Birmingham. I had never realised how green the city was.

The menu was limited to three or four choices for each course – both of us selected the Chicken Liver Parfait to start and Steak for the main course.

The parfait was superb and a good size portion. It  was served with a lovely sweet and fruity pickle and of course crisp toasted artisan bread.

The steak was served with triple cooked chips, over roasted vine toms and we ordered a side portion of Onion Rings to share. I would say that FattyCat’s Medium Rare and my Medium steak were both overcooked.  Hence my Medium was well done and as such was a bit chewy. Portion size again was very good. We decided not to complain, though. 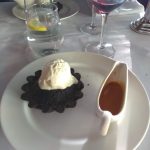 Finally, we both had the sticky toffee pudding with caramel sauce and vanilla ice cream. The sponge was as light as air. It simply melted in the mouth.

The food was accompanied with a bottle of wine – Eleve Pinot Noir. It was light and fruity. Not what I would choose to go with a steak, but it was enjoyable and included in the offer. The surprise was this was priced on the wine list as £27 a bottle. Or online for £7.53 ( Matthew Clark Wines ). We were also bought a bottle of water  without asking, which was a nice touch.

Eating this early meant that the restaurant wasn’t busy and the plethora of waiters and waitresses were looking for things to do making them feel a little over attentive – but they were all  professional and friendly.

In summary – this was a fabulous experience. We were not rushed or treated as second class for having the Groupon voucher. The food and drink were lovely. The restaurant and bar have a classy, but relaxed atmosphere.

Can’t wait for an excuse to return.

Check out their website and book yourself a table. Marco Pierre White Steakhouse