Purnell’s Bistrot is based in the banking quarter of Birmingham City Centre, this beautifully designed restaurant sits just off Colmore Row. The outside is very unassuming, but inside it is smart, relaxed and modern.

We had a Groupon voucher which meant that the we had restrictions on what we were allowed to order from the menu. The main restriction was that we could only chose a main course that was below £21.50 – on the evening we visited this meant we couldn’t select any meat mains. We asked of we could pay the additional but was told no. 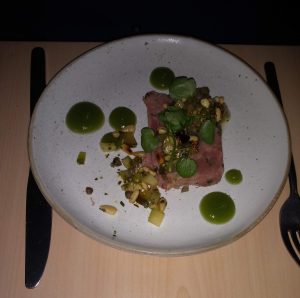 To the eye it didn’t look very appealing, but FattyCatt said it tasted very good. The portion size was ample too.

What we didn’t photo was the lovely ‘homemade’ bread that was served with the starters. 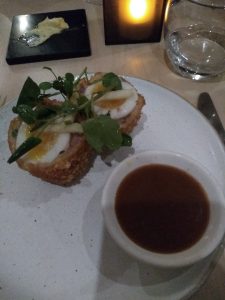 To be honest I struggled to choose a starter none of them jumped out at me screaming eat me. In the end I chose what I thought was safe option…..Posh Scotch Egg with GP Sauce.

The sauce was stunning and I would certain buy this if it was on sale in the supermarket.

The egg was lovely too. meaty – with possibly a hint of bacon mixed in with sausage meat and an almost hard egg. (I really don’t like runny eggs, so this pleased me).

The portion size was great and I would have been happy having the scotch egg with a salad as my main course. 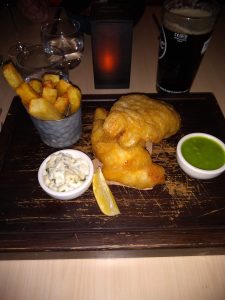 FattyCat struggled to select a main course as he has a shellfish and prawn allergy. (This is why we had asked if we could pay the extra for a meat dish).

In the end he went for the beer battered fish with chips, mushy peas and tartar sauce.

Mushy peas were instantly donated to me as he hates them and love them, They were nice, but nothing special.

The fish on the other hand was extraordinary and the tartar sauce was special – I was regretting my choice when I taste this.

The food was overall good and the flavours all beautifully balanced – so on this basis worth the Groupon Voucher of £50.

But the service was atrocious. We were seated quick enough, but then service was incredibly slow. We had to ask three times for the dessert menus and waited twenty minutes after asking for the bill. This is not the level of service we expect from this level of restaurant and in a place that warned us we only had the table for two hours.

With so much choice in Birmingham I don’t see us visiting again. Sorry Glynn the food was yummy, but the service was a crying shame.